The Shanghai government on Tuesday announced a rapid lockdown in 9 of its 16 residential districts to allow officials to carry out mass testing for the Chinese coronavirus, Xinhua news agency reported, adding that restrictions on movement will last until ‘on Thursday.

All residents of the following districts have been confined to their homes from July 5: Huangpu, Xuhui, Changning, Jing’an, Putuo, Hongkou, Yangpu, Minhang and Baoshan. An unknown number of residents of Shanghai’s Pudong New Area, Jiading and Fengxian districts were also ordered to obey stay-at-home orders on July 5, according to Xinhua, China’s official news agency. Movement restrictions were set to last until July 7 while city health workers screen residents for the Chinese coronavirus.

“During the tests, people living in the affected districts would be required to show a test taken within the last two days to leave their homes,” the Shanghai municipal government wrote in a message posted by its official social media account. WeChat, as reported by Reuters. .

“No household or person should be left behind,” the Shanghai government said Tuesday of its mass testing program.

Shanghai health officials ordered the 72-hour lockdown after claiming to have detected a new Chinese coronavirus infection this week linked to a karaoke bar. The fair had recently been frequented by residents of several areas of Shanghai. 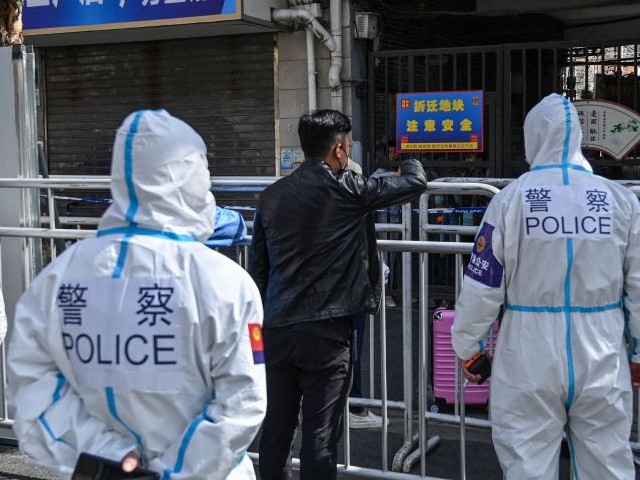 Police and officials wearing protective gear work in an area where barriers are placed to close streets around a lockdown neighborhood after new cases of Covid-19 were detected in Shanghai on March 15, 2022. (Photo by HECTOR RETAMAL/AFP via Getty Images)

“Testing efforts are aimed at detecting and controlling the risk of spreading the virus as soon as possible,” the city’s epidemic control group said on July 5.

The Shanghai municipal health commission reported eight new locally transmitted Chinese coronavirus cases on July 4, “of which seven were found in quarantine areas”, according to Reuters and Xinhua.

Shanghai’s government recently claimed to have ended a previous Chinese coronavirus lockdown decree that affected more than 25 million of its residents for 65 consecutive days. This stay-at-home order officially lasted from March 28 to June 1, although reports indicated the lockdown was never fully lifted for some districts.

Shanghai continued to impose restrictions on the movement of its people throughout June, with many of those restrictions expected to remain in place until the end of July, Reuters reported on Tuesday.

“The city is already requiring all of its neighborhoods to organize massive residents’ tests every weekend until the end of July. Residents must also test themselves every three days to enter public spaces such as shopping malls or take public transport,” the news agency noted.

Shanghai has not said what it plans to do with residents who test positive in the 12 districts ordered to undergo Chinese coronavirus tests this week, although it indicated on Sunday that it could force them to travel to city-run quarantine sites.

“From 4 p.m. on Sunday [July 3]99 close contacts and 35 sub-close contacts have been identified for quarantine,” Xinhua reported, referring to close contacts of patients linked to the city’s karaoke bar cluster infection.

Previous Chinese coronavirus lockdowns in Shanghai have hurt not only its economy, but also that of greater China and the world. Shanghai is considered the financial mecca of China, itself ranked second in the world economy. The metropolis has the world’s busiest shipping container port and dozens of manufacturing plants owned by the world’s biggest multinationals, including electronics giant Apple and electric vehicle maker Tesla.

In 1992, Laurie Houts was found strangled in her car. Her boyfriend’s roommate – now a tech CEO – has just been arrested for her murder.